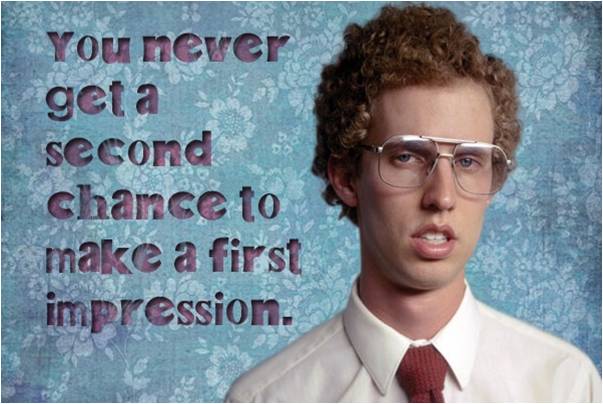 “Life is about impressions. And the most important impression you can make is that first one. But the thing with first impressions is that they really last a bit longer than that first initial moment of interaction.” That was the beginning of a brief talk I had with my students on the Friday of the first week of school. It was more of a gentle backdoor address that I hoped would remind students of the expectations we had worked hard to establish throughout those first few days. But as much as it was a reminder to my students, it was also a reminder to me. And if I practiced my own advice more consistently, it would make teaching a whole lot easier.

See, as troubling as the whole don’t smile until November is, the theme has a very slight bit of credence if understood within the right context. It doesn’t mean that you have to be all hard bodied and authoritative towards your students at the beginning of the school year. More accurately, the saying should express the notion that your students are reading, perceiving, and ultimately judging your mannerisms and behaviors just as much as you are theirs. On the second day of school, during the national anthem, one of my students was nonchalantly working on his name tag. My optimistic side of observing this act thought, “Good for him, he actually cares about his work. Maybe I’ll let it slide.” But the realistic side of my thoughts echoed loudly, “Nip this behavior pronto. One kid starts jotting a few things while the anthem plays and it goes unaddressed, by November you’ll have kids slouched over their desks while the Anthem is on.” This will happen. Unfortunately, I know from experience. So, after the anthem and announcements were all completed, I addressed it. I singled him out long enough, and more importantly, at the right time of year, for not only him, but the rest of the class to understand an implicit, but perfectly clear expectation and classroom culture.

Impressions, especially first ones are key. The first weeks of school are vital in establishing your classroom culture and expectations. It is important that even as the first weeks or so wind down, you continue to establish, not boundaries, but expectations for your students. But also remember that your character, through words and actions, throughout those first few days and weeks, are equally being impressed upon your students as well.