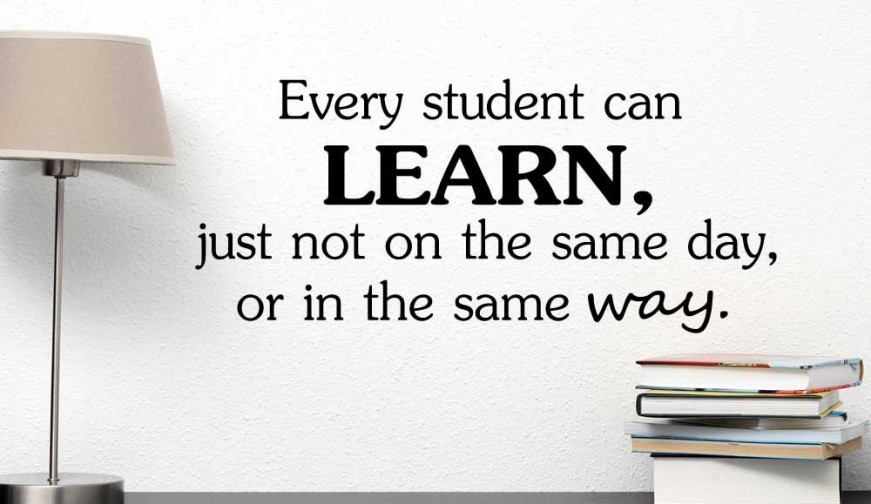 “Every student can learn, just not on the same day, or in the same way.” – George Evans.

The year I became an educator, a close friend bought me a book titled, 1001 Pearls of Teachers’ Wisdom. And every weekday morning, while I am having my tea and eating oatmeal, I randomly flip through a few of the pages and read a couple quotes. Truth be told, I flip through the quotes just long enough to find one that seems “tweetable” – and then I tweet it, followed by a few hashtags about motivation, all in the hopes of getting a few more followers. I would be lying if I said the quotes I read every morning were my inspiration for the day. But every now and then I read a quote like the one that opens this blog, a quote that lingers in my psyche throughout the morning only to be revisited by my mind at some point hours after the school day is complete. “Every student can learn, just not on the same day, or in the same way”. It is a saying so simple yet complex; so direct yet completely metaphoric. Every year, we teach a group of students and every year, we face our challenges with just how to get through to every single last one of them. And in their 10 months with us, we fail a lot.

But it is the way we fail that is most interesting to me. That is because uncovering the ways in which educators fail to help all students learn may be arguably more important than analyzing the ways that select teachers succeed in their classrooms and with many of their students. I say “many” and refrain from using the term “all” because outside of the movies, I have never seen, heard, or read about a real teacher who got all of her students to learn everything she wanted to teach them. In reality, we rarely work in totalities.

But because we are comfortable in acknowledging that we never do quite work in totalities, we take a quote like, “Every student can learn, just not on the same day…” and pass the buck. We either chalk up a student’s lack of engagement to their maturity that given year, the classroom dynamic, or the child’s “inabilities”. We rarely slide the notion that perhaps that child isn’t engaged and subsequently isn’t “learning” to our side of the table. Even when we hold that child who isn’t learning in high regard, we still tend to, in an omnibenevolent gesture, “hope” that they will “figure it out” and wish them luck on their next 10 month stint with education the following year. I know that I have done this. I am not convinced that even doing this is enough.

I’m not convinced because the students who spend those 10 months with us are real people, like actual human beings with hopes, desires, and goals. 99.9% of them will, at least, live into their 40s – the question is, what will they be doing at that time? And more importantly, who does the burden really lay upon? That teenage kid who you “taught” and perhaps gave up on because you looked at their life in 10 month stints, or you, the adult who gets paid to teach every student on your attendance roll?

In the 10 months with us, I have witnessed students who would come to school without binders and pencils eventually become A and B level students who eventually came prepared to class on the daily. Sadly, I have also witnessed the reverse. Yes, we are only with these children for 10 months, but that amount of time begets a certain amount of power that we solely hold. So, remember that yes, you are only with your students for 10 months and every student can learn, just not on the same day, or in the same way – but, 10 months is also plenty of time to get all of your students on a page that leads them to writing their own story where the main character triumphs.