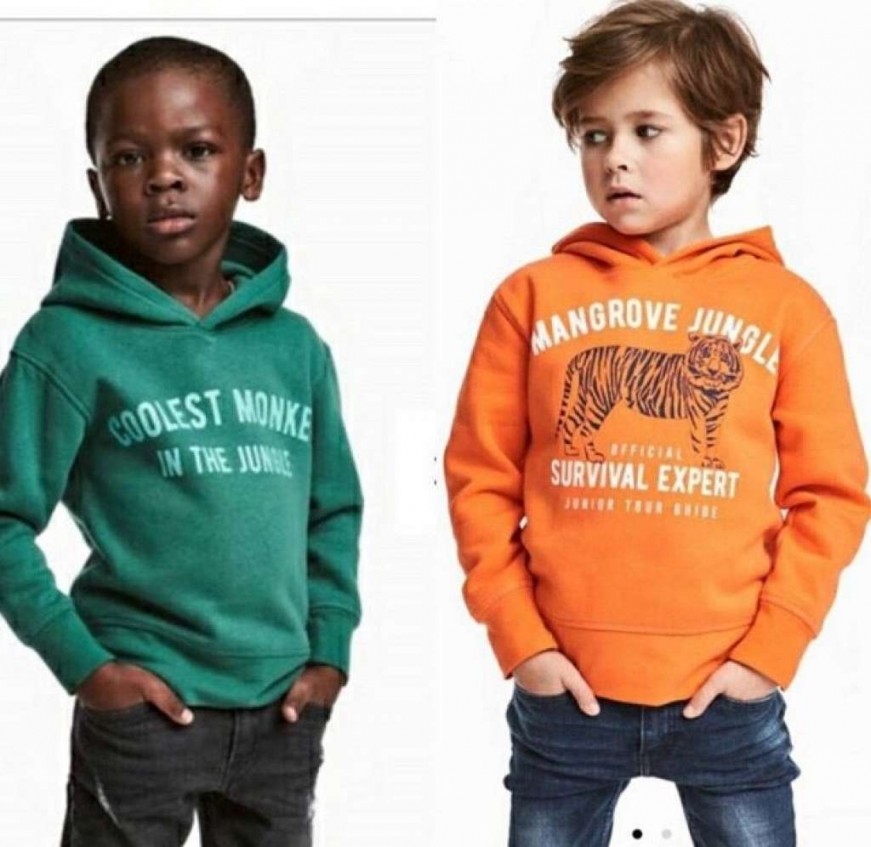 I first caught wind of the handsome black boy outfitted in a hoodie with the words, “coolest monkey in the jungle” on Monday morning as I scrolled through my Instagram feed right after my alarm clock went off. It was the first day back to school after the two-week winter break and I had my morning planned with activities meant to refreshen our classroom culture. I wanted to do a New Year’s Resolutions slash reflection activity that centered on some key questions I hoped my students would reflect upon and write out. I find the first day back from a long break leaves students feeling a little mentally clouded so I saw this as an opportunity to dust off some skills in an easy but productive way. Admittedly, I was also a little foggy from the break and didn’t want to get into anything too hardcore at 9 a.m. The groundswell against the H&M ‘monkey’ advertisement hadn’t taken full steam yet and I couldn’t devote time to analyze just exactly what was going on with it. I had to get to school and take attendance and talk with my kids.

When I got home from work on Monday, I was able to tap into my social media just in time to see the snowball in full composition. The educators and activists that I followed had begun to chime in on their pages and by the time the 6 o’clock news came around, this monkey business H&M had “earned” found its way into the A block. I had the first three days of my morning English block mapped out already but decided to scrap those plans for some new learning. We were already focusing directly on education equity in preparation for our social justice speeches so I figured Tuesday morning would be the perfect moment to re-energize our process with a little bit of context.

As my students plodded into the classroom on Tuesday morning they were greeted with the now infamous image centered on the projector screen. They sat down, listened to the announcements and affirmed their presence as I took attendance. I then drew their attention to the screen and asked them to simply observe what they were looking at in silence. I drew context by briefly speaking about the store they were all well aware of and its newest advertising campaign. I just showed them this singular image, saying no more and waiting…hoping that I would be able to extend a dialogue amongst my 12-year-olds that would segue into the subsequent image I had queued which would contrast the black boy wearing the hoodie that labeled him a cool monkey in a jungle with a white boy who brandished words across his chest that labeled him a survival expert. We had only just completed a full day back to school, all still feeling a little out of our element, so I didn’t know what to expect. I just wanted to have another conversation with my kids, build on and off of ideas and go from there.

My students gazed at the singular photo. The class was pretty quiet for about 3 minutes as I pushed to extend the discomfort of learning, part of what we must go through in order to advance education equity. I asked the most open-ended questions I could muster up that early on a cold Tuesday morning: So y’all, what is wrong with this ad, what is right with it…or, shoot, what is this?

Some students murmured to themselves or to their friends beside them. The type of murmurs that implicitly whisper I don’t want to be the first one to speak my opinions because it’s early in the morning, and it’s cold outside, and we just got back to school, and I kinda think I know exactly how to answer this but because it seems so obvious I must be wrong, type of murmurs. I probed by lifting my voice to raise the energy of the room while somewhat leading my active witnesses. C’mon y’all…is there anything wrong with this ad or am I just crazy?

The first person to speak happened to be the only white male in my class. We probably could have stopped with his comments to be honest. He went in for a good 3 minutes about how this H&M ad was “kinda racist” because they have a black kid wearing a hoodie that says “monkey” and “jungle” on it and that an image like this is offensive to black people because saying a black person is from the jungle is disrespectful to that person, and calling a black person a monkey is also not cool because monkeys are animals, so when you describe someone as an animal that is like a diss, a diss not only to them but to their people, like to all black people. Don’t quote me in verbatim but those were his words. A 12-year-old, white child, born in 2005, no knowledge about the historical context behind the word “monkey” in its relation to describing blacks or even the contemporary context behind what putting these words on a hoodie and then on a black boy means. On most days, this same student would rather play with his homemade slime than engage in a classroom discussion, let alone start one off.

I gently guided his words into further context by indicating that this was a new advertisement that H&M just put out on their online catalogue for their spring collection and that the model in the monkey hoodie was the only black boy featured. The ice was cracked at this point; my students had warmed to the framed dichotomy of realizing that they were, in fact, fully emerged in Mr. Morris’ English lesson for the day and also that the advertisement was blatantly messed up. The fire was fueled as they realized their thoughts about the “all too good to be true” answers festering in their minds hit my intended radar.

Their analysis of the clear racism that was produced by this advertisement made me smile inside but say to myself: these youngins’ get it, so how did a company that big, who employed expert marketers and advertisement agencies not? My friggin’ heart cracked when one of my black girls, one who rarely adds any input to any discussion, chimed in and spoke from her understanding of what it meant to be dark-skinned and see people calling other dark-skinned blacks “monkeys”. It was raw emotion and understanding combined and I couldn’t do my normal teacher thing and progress the dialogue by adding something on top of what she said.

I paused, as did the class. I pulled up the subsequent image with the white “survival expert” juxtaposed beside the black “cool monkey” and didn’t say anything for what seemed like 5 minutes but was probably only 30 seconds. It was still only Tuesday morning, the second day back, in a middle school located somewhere in cold Toronto.

After a minute or two of looking at the second image and speaking the image into context, this time with some leading frameworks that opened up the idea about the white boy being the expert of survival, the expert of the “jungle” and leaving it at that, my 7th grade classroom brought back memories of days sitting in graduate courses on the 12th floor of the social justice department at OISE. I found a seat in my classroom and dissolved into the conversation. Not as the teacher, but as an equal participant. Ironically, we were all on the same page with this one. No rebutted suggestions from students about being called a monkey by their mothers at the age of four and no “no big deal” refutations. It was quarter past ten and we hadn’t transitioned into the scheduled geography period by this point. Teach about another type of natural disaster or talk about an issue that was critical, cultural, and relevant to us all? I weighed my options carefully, for about five seconds.

Unfortunately, the H&M advertisement showed us all that society has not progressed with the plight most of us had hoped it had. With the New Year comes an almost cyclical amnesia of hope that we all internally establish in regards to race relations in our society. On the first day back, I heard kids telling other kids to “leave that in 2017” at least a dozen times. But somehow, racism still permeates. The H&M advertisement with the black boy “adorned” in his “coolest monkey in the jungle” hoodie is just our most recent example of how much work we still have to do.

Yes, it is just a shirt. But we cannot continue to “get over it” because of the simple fact that dates on the calendar change but inherent racism does not. Mistake or deranged marketing plea, this is a teachable moment that must be spoken on and about. We must dwell on the ashes of inequity in order to criticize, analyze, and rise from them. And we must do this in our classrooms, by having these free-flowing, open-ended dialogues with our students, who, by the way, are more socially aware and critically adept than we give them credit for. We talk about education equity. Well, in 2018, we can start with this piece.