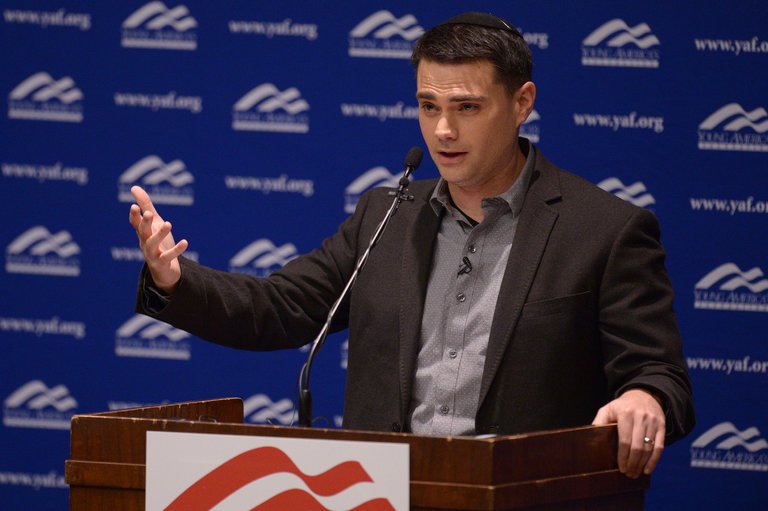 I started on YouTube watching some Lord Jamar interview and somehow, thirty minutes later, was watching a Piers Morgan Live episode where he was debating a guest about automatic weapons and the connection to mass killings in the US and the Second Amendment. Actually, it may have been an hour and thirty minutes of me travelling down a path between those two distinctive videos. You know how YouTube gets you sometimes. Anyways, this fellow that Piers was debating, a seemingly young, self-proclaimed “proud Jew” was pretty much dismantling the well-seasoned Piers with statistics and logic. His name was Ben Shapiro. I was struck by his intelligence and knack for slicing through counter points. Naturally, my YouTube adventures continued and I clicked and watched and clicked and watched video after video of Ben Shapiro in which he appeared in interviews, on panel discussions, and delivering keynotes. In most of them, he was effortlessly ripping college kids and adults apart on topics ranging from the military, to gender, to taxes. Then I watched a few where the conversation centered on race and racism. Again, he backed down less prepared folks through his guiding position: that there is no institutional racism simply because we cannot point to any institutions that are actually racist. To the untrained eye, he seems to make complete sense. And again, he is very smart. But I smell at least two fallacies in his argument and the argument of all smart people when they say there’s no institutional racism anymore.

“Show me an institution that is racist and I will help you fight it”, he professes. He talked about Baltimore after the uprisings that were sparked by the death of Freddy Gray and questioned how the Baltimore government and police force could be racist if they had majority black cops, a black chief, a black mayor and a majority black caucus. He painted a very clear picture and the questioner, out of ammo, ducked his head as he went back to his seat in the audience. In another video, he dismissed the idea that education is a systemically racist institution based on the same, oversimplified, either-or argument.

But I have an either-or dilemma that I would like answered. I would like it answered because I have much trouble with smart people claiming that there is no institutional racism by failing to acknowledge some very clear signs that point to the fact that there has to be or else we would be making some pretty damning claims.

Let’s stick with institutional racism in education. Let us start from the end. So, if black students are perpetually dropping out of school in way higher numbers, receiving lower grades on average, being suspended more, and not getting into the best colleges, and this doesn’t happen in small pockets across the country but nationwide, across gender and class lines decade after decade, then we can only derive at two conclusions. Either black people are actually stupider than everyone else or there is actually institutional racism. There are only two answers to the phenomenon of chronic black academic underachievement. We don’t need to play this game of overcomplicating and then subsequently oversimplifying what is actually happening in our society. We need to ask basic questions and be truthful with our discussions that follow. If there is no institutional racism in education, or corporate environments, or any other institution for that matter, even in a city with an all black police force and a black mayor, then we are essentially saying, “blacks get what they deserve”. If there is no institutional racism, are we not acknowledging this point?

A “system” involves not just the mortar and bricks and bodies of the environment but also the cultural messages and institutional practices as well as the personal beliefs from the individuals within it and the subjective context of the groups that particular bodies belong to. That is precisely why an all black police force can be institutionally racist even when they are all black! In education, we are all still complicit in the practices of an institution that is inherently racist. Now, we can debate the degree to which said institution has progressed, but please don’t be the smart person who thinks that there is no institutional racism just because we can’t tangibly point to how an institution is explicitly racist. Especially when, in most cases like education, we actually can.