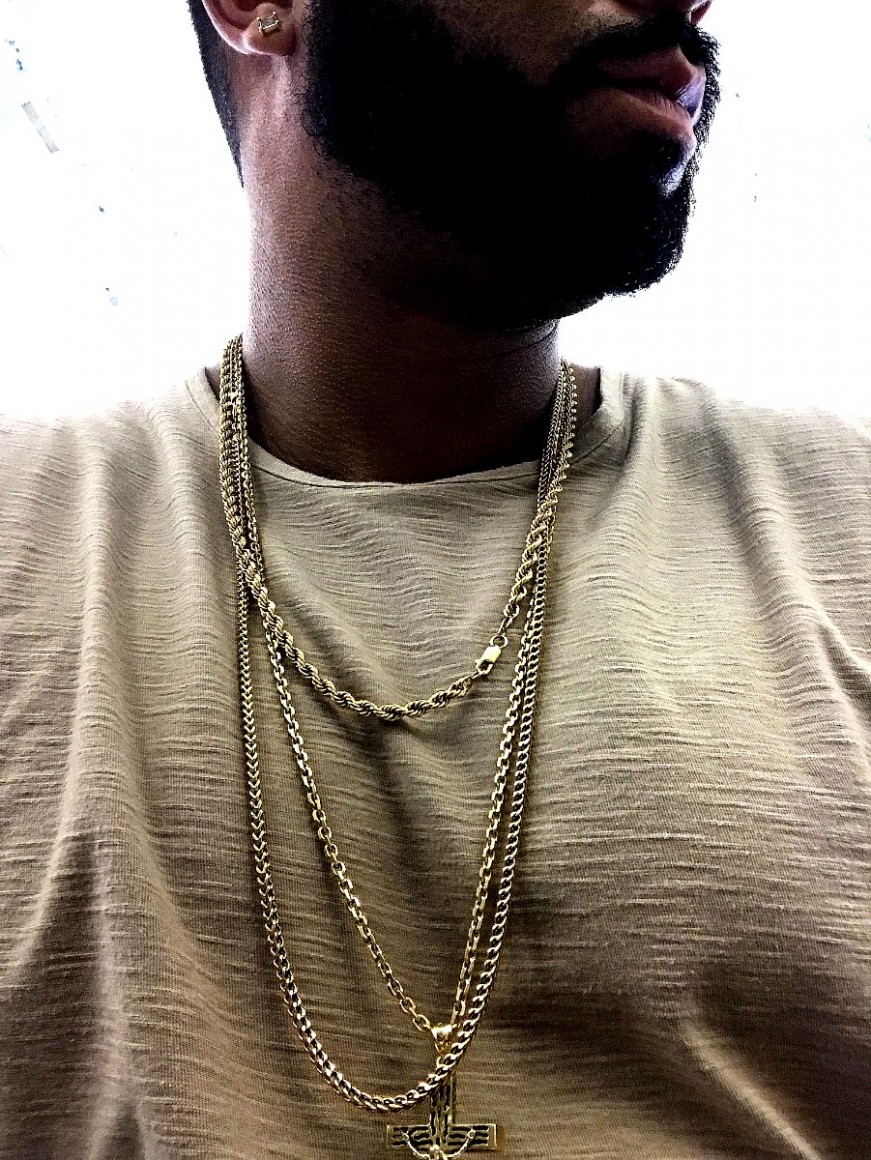 I usually come to work with three chains on, tucked in of course, a 60 gram Cuban link bracelet that I actually owned for years but never wore until I started teaching with a gold Citizen watch that I bought for about 300 bucks during a period in my mid-twenties when I was really faking-it-to-make-it. The timeless joints always appealed to me, even at a young age, so they still figure into my “look” at thirty-two. It is not about the countless hip-hop persona comparisons I get, but rather those subtle comments from “street savvy” students that make me reflect on just how my aesthetic representation as a teacher affects student learning or rather student perceptions about things not taught through textbooks.

In my first year, a student told me I looked more like his “hood” uncle than a teacher. I didn’t know how to respond.

The reason why I wear three chains to work, as well as nice kicks, is simple: I wear three chains to work because athletes, entertainers, and drug dealers can’t be the only ones these kids look up and relate to. Trick probably does love the kids, but so do I. And sorry Mr. Trick Daddy, but Mr. Morris now has more influence, at least on a small segment of my local population than you. I work in Toronto but it would also be the same fact if I worked as a teacher who wore three chains in Dade County…I would think.

Seriously though, the way I aesthetically represent myself is important to my pedagogy as an educator. I work in the hood. Not hood in the sense of Crenshaw Ave. or 145th and Broadway or insert your local systemically impoverished hood here, but my hood. And just like any “hood”, not a lot of people “make it out”. The kids I teach may not get caught up in gang culture and die by the age of 20 (RIP to the ones that unfortunately do), but they have a more-than-likely chance of ending up in a dead-end job, perpetuating the cyclical environment they were raised in, and looking back on life wishing that they had actually listened to the things their teachers were telling them beyond the books.

And that’s the thing. A lot of what I find important in my practice happens beyond the classroom lessons in Math, English and Science. Every single day, I push to elevate the importance of learning academic skills in my classroom but I am also aware that not every student I encounter is going to find his or her happiness through a college degree and an elite-status profession. Not all my students are going to become doctors and dentists and politicians and lawyers. But I hope that none of them will become felons, caught up in the trappings due to the wrong things they see, or have ultimately learned, from the “OGs” on their block. Most of my “teaching” comes in the form of conversations during lunch or after school or even during class about the little important things about life: grinding, finding your value, valuing yourself, understanding that your circle of friends at 14 will not be your circle of friends at 31, and telling them that every high school (I teach in middle school) has its upside and downside.

And they listen because I am their teacher and give them that real. But part of me also thinks that they listen because I rock three chains. Call it superficial and short-sighted, shoot, call me out for being dead wrong, but identity is socially complex, and maybe just perhaps my “look” counters and challenges some of the perceptions we all grow accustomed to develop and accept. Either way, I do hope that the learning lessons I have with my students throughout the year will be more impressionable than the three chains I wear merely to be myself.