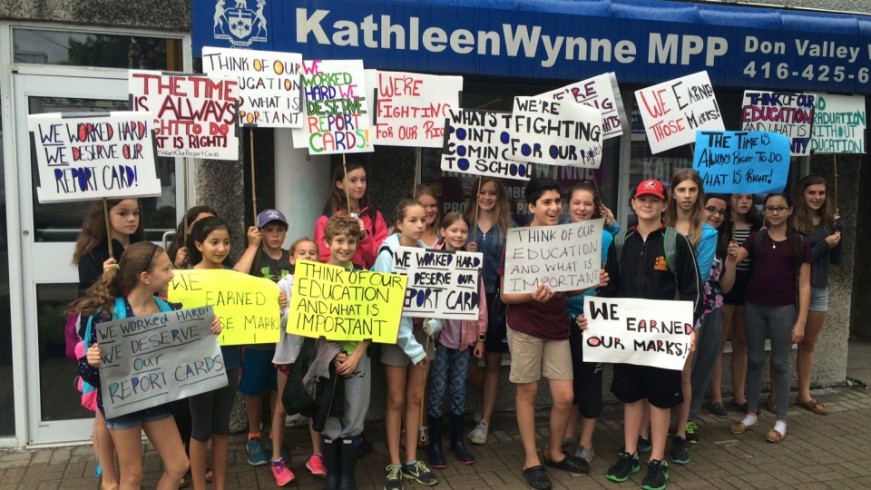 In Ontario right now, the teachers’ union and the government are grappling back and forth over a new contract. The wrestling has resulted in several amendments to the teacher’s role for the remainder of the school year. Most recently and most importantly, some school boards have decided to simply give students a pass/fail letter instead of the traditional report card at the end of the year. So besides providing a list of their students’ grades to their principals, teachers don’t have to write report cards – no comments, basically nothing. When I first heard this news, my line of thinking was not with the warfare that such a move means for the immediate future of contract negotiations. Instead, I began to question how such a tangible change to a teacher’s job would affect teaching practice. I thought about myself. Now that I don’t have to write report cards, how will that change the way I teach?

It wouldn’t be a stretch to say that every teacher teaches with the “burden” of getting through curriculum. It also wouldn’t be a stretch to argue that the curriculum currently prescribed cannot be adequately covered in 10 months of school. Teachers adapt by skimming over parts of the common core and going deeper into others, teaching topics that they have a passion for, and being flexible to students’ needs. But unfortunately, when that end of the month (or curriculum unit) comes, it usually signifies test time and we move onto the next “strand”. Under the pressure to cover curriculum, we move on whether students “get it” or not. And we do this primarily because we have to write a report card at the end of the term or year. We have to show proof of what we did with our students.

I asked several teachers how not writing a report card would change their practice. Some pointed out that they would slow down and teach according to student needs (what a novel idea!). Others suggested that they would, “teach what they wanted to teach and not what the curriculum dictated as important”. While this idea has the damaging potential to re-create provisional self-esteem and privileges the teacher once again in the power dynamic of the classroom space, teachers who are engaged with the material would also exponentially benefit student learning.

No report cards would change my classroom immensely. It would afford the opportunity to truly co-create an educational environment where kids would enact agency in their learning. We could establish relevance and engagement in a way that goes beyond what any burdensome report card produces. No report cards – fine, we can introduce peer reviews and grading, that way the teacher is not the sole authoritative figure dolling out some final piece a paper that is supposed to mark their idea of how they think a kid did throughout the school year.

If used correctly, a final pass/fail letter could be a great move. Our current system is intrinsically flawed anyways. So despite the political maneuvers between government and teachers’ unions, below the surface this “no report card thing” marks a tremendous opportunity to re-examine the paradigm of education and how we demarcate student success. Not having a traditional report card is unfortunate for the children who are programmed to base their academic validity on a letter grade or a percentage. But despite its shortcomings, it is also a unique opportunity to explore how the politics of accountability and traditional forms of professionalism impact how teachers teach.