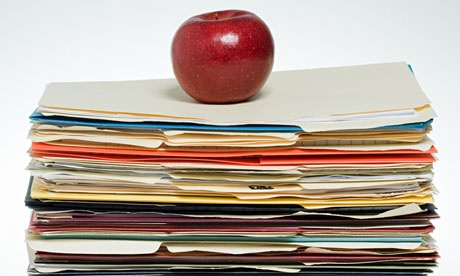 The age-old pedagogical questions when teachers grade work always seems to eek its way on to the table of progressive practice year after year. Ultimately, grading involves notions of fostering self-esteem or delivering “objective” (but very subjective in most cased) assessment. So, where do you fit on the continuum of “grade dealers”?

I recently finished marking a pile of culminating Language assignments. This is the second part of the job that I would love to avoid if I could. What usually tends to happen is that soon as I get around to marking a set of assignments, I collect another pile of work! Unfortunately for teachers, the turnstile of grading work never stops. Teachers must not only mark but must also wrestle with the dualistic realities that are espoused through grading a student’s work. Two prominent and dueling philosophies arise when teachers talk about the “purpose of grading.” One is grading to send a “wake-up call” to students and the other is grading work to boost student’s “self-esteem.” Put into context, this means there is usually two different ways that most teachers’ grade work. Some give a student a little better mark than their work deserves because they want them to live to those expectations set for them in the hopes that the elevated mark will boost their self-confidence and make them believe that they are actually capable of achieving success. This sort of self-fulfilling prophecy works in athletics all the time (which is a loaded sentence in itself and a topic I may eventually blog about).

By using the “positive validation” method, you also run the risk of inflating their competence and diminishing their understanding of effort. Youth are forever internalizing experiences. If they know they did not put their best effort forth and still got an A, instead of wondering how well they could have done if they worked their hardest, they may be satisfied and fall into a complacent false consciousness of what merit, self-worth, and effort all mean. But again, it depends on the student and their character.

Then there is the other pedagogical side of “waking up” your students with an assessment that delivers the brutal and “honest” truth (and at times, may even exaggerate it). A numerical “you need to step it up” can sometimes shake up students and re-focus their efforts and eventually churn out better work in the future. Whatever philosophy you begin to employ, grading is an especially fragile subject near the beginning of the year. From my own personal experience as a student growing up, high scores on early assignments encouraged me; they pushed me to continue working hard in class to maintain the high grades I initially received. They also demonstrated to me that my teacher thought I was smart. Conversely, once I received a low grade or two at the beginning of a course, I subconsciously “checked out” of that class, putting forth minimal effort with the simple intentions of sliding by since attaining excellence seemed unreachable. This dynamic speaks to the adolescent mind and what the beginning of a new school years means to them. The beginning of the year serves as a fresh start for students; a chance to create or improve an ever-developing identity in a whole new classroom and an opportunity for them to “re-classify” themselves.

Individuals have a multiplicity of motivations that run their daily hopes, goals, and ambitions. These internal drives combine with external experiences to create one’s character. With grading, you have to judge it on a case-by-case basis. When you are looking at a student’s work, it is important to have a thorough understanding of that student. Some students need a boost in confidence; others need to be brought back down to reality. Grading then becomes especially effective when you have a feel for your students. This is precisely why I don’t support the idea of “blindfold” grading. Teachers often tell me, “I cover up the names when I mark that way I am objective.” And while I understand the premise and logical pedagogy behind their statements, I feel that a teacher is more that a body whom is simply distributing “un-biased” assessment. Grading is yet another facet in which we teachers are provided the opportunity to build and nurture tomorrow’s future, our students. So we need to be a little personal about it.