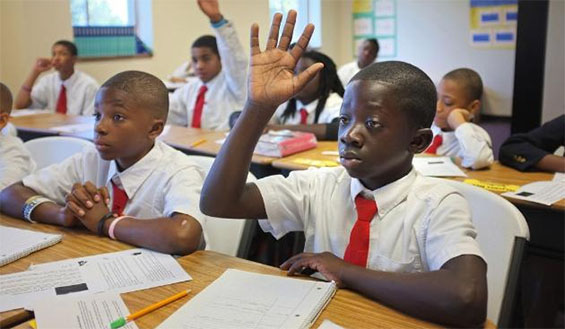 Boys do learn differently. So, what next?

I put on a movie to start first period. It was a documentary about the history of Canada and the episode was detailing the war of 1812. As I attended to a few menial tasks, I routinely scanned the room ensuring that my students were engaged or at least had enough social awareness to pretend they were. I figured the movie was our best option for today; my students needed a brief break between the project they just handed in and the next task I was about to assign. My scanning didn’t last more than a few seconds before I noticed a group of boys more interested in their fidget spinners than the video detailing events leading up to Canada’s becoming. I walked over to the group and told them to put the toys away and focus on the doc, reminding them that the information would be used for our next project. Five minutes later, I needed to address them again. This time, it wasn’t the spinners but the low commotion of dialogue; one of my boys actually had his back turned away from the screen while chatting with a peer. I bellowed out a few of their names and gave a stare; publicly acknowledging boys (for both positive and negative feedback) always works better. It worked and they paid attention…for a bit.

The same thing happened a few hours later during math class. After delivering a short lesson, I gave my students some practice work. The girls worked quietly in small groups, asking for help when needed while making small, and quiet, talk. My boys on the other hand, ventured off into distracting behaviors that took them so far away from the task at hand that they barely got beyond scribbling the date on the top of their worksheets. It was a blah morning for me as a teacher: no relatable math lesson, no inspiring words to encourage my students, but I still had much of my girls on whatever task was at hand and struggled to keep my boys attention for longer than mere minutes. In light of my admittedly subpar teaching, I was really struck by the fact that boys really do learn differently.

After positioning myself in a space that would force these boys to actually do some math work, I began to think about the whole notion of “boys learning differently”. When you boil it down into traditional assumptions based on gender and identity, if boys learn differently that also means girls learn differently. The issue manifests because school is catered to the learning styles that females typically feel more comfortable with. That can be a loaded statement if taken at face value. But think about it: saying “boys learn differently” is not a charge against boys per se but rather an indictment on how we educate children. In essence, if we are routinely struggling as educators to engage and teach half of our student population (read: boys), then it is not on the fault of boys but on the fault of implicit teaching measures and pedagogies that impede male student learning. Saying “boys learn differently than girls” is a valid argument. But at some point the, “okay, so then what?” has to kick in.

I know if I come to school and teach in a mundane, status-quo like manner, I am leaving many of my students uninspired. I also know that, for the most part, no matter how I approach the material I am supposed to cover, the majority of my girls are going to sit, work, and try to learn it to the best of their capabilities. I don’t have the answers for how we all should move forward with our craft. I do know that when we say boys learn differently, we have to come forth with strategies and applications that reach the way our boys learn.