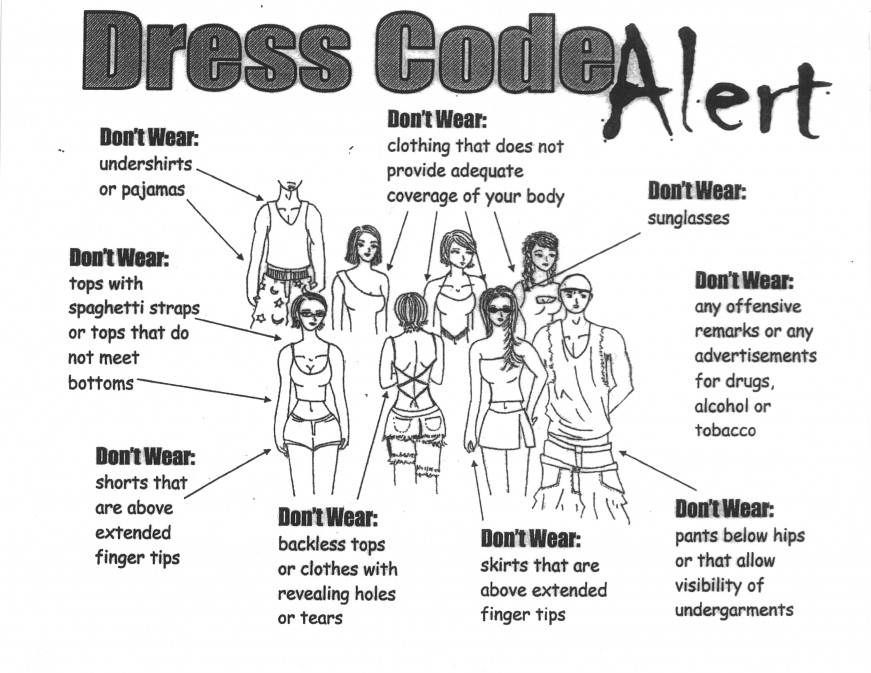 Have you ever looked through a school’s dress code policy and then pictured the type of student that said policy would affect? Of course you have, because when you notice a student for an infringement on the dress code policy you are participating in an exercise in which you are matching bullet points in an agenda with a specific body. Have you ever taken longer than a second to think about dress code policy while simultaneously considering the students who infringe upon it? Probably not, why bother: you are just a teacher in the school, not the maker of these school rules. Your job is to make sure that the school simply operates within such school rules.

Welcome to 2017, where ripped jeans that expose thigh skin, spaghetti-strapped tops, lululemon pants, and “low riding” are some of the clothing choices barred from many public schools. Read that list again. Now, ask yourself this question: who do our dress codes target? Unless you have actually been Keeping Up With the Kardashians, you will know exactly whom they target. I look at the list and I see, “girl”, “girl”, “girl”, and “boy, whom is most likely black”. I think we can begin to draw some conclusions here, one being that dress codes sexualize the female body and racialize the black male body. Let that simmer and keep reading on if you agree with me.

Over the last several years, I worked in a school that ranged in students from kindergarten to eighth grade. On numerous occasions I saw girls get “dress coded” for wearing things like spaghetti strap blouses or tank tops. These girls were 12 or 13. In the same days as these “infractions” would occur, I saw 7- and 8-year-old girls stroll through the hallways in the exact same outfits. Same outfits and somewhere in their desks or backpacks they had the same agenda that outlines the same dress code policy. Why did the girls in 8th grade get in trouble and not the 8-year-olds? Once, you’ve come to that answer, ask yourself what implicit assumptions are we making when we pick and choose like this.

We sexualize and racialize bodies through dress codes that target specific people while simultaneously maintaining that these one-dimensional standards are universal. All the while, do we ever consider exactly how a dress code benefits student success and the greater good of education? I was once suspended for wearing my hat in the hallway. I missed two days of school and the only learning I soaked in was that the school and the real world were two distinct places in which one of them pissed me off exponentially more than the other.

We should be thinking about ways to engage all learners in education. We should teach that there is a time and place for particular aesthetics, but I question whether or not that should be done through a dress code policy. Perhaps explicit teaching practice that fosters student awareness on the complexities of cultural appropriateness, spatial or social awareness, and for lack of a better term, “playing the game of school” (which translates into the “game” of life, at least, arguably, from a cultural standpoint) is a better route to take. If you think a dress code is appropriate, bring every stakeholder to the table and have an honest discussion. Do not rely on the so-called gaze of the powerful and privileged to dictate what is and is not acceptable. If we allow this, it is clear how and who such a policy affects.